Conor McGregor says he has retired from fighting – for the third time in four years.

Ireland’s former two-weight UFC champion, 31, has a record of 22 wins and four defeats.

He has previously announced his retirement in 2016 and 2019 before twice returning to the octagon.

“Hey guys I’ve decided to retire from fighting,” he said on Twitter on Sunday.

“Thank you all for the amazing memories! What a ride it’s been!”

McGregor signed for the UFC in 2013 as a two-division Cage Warriors champion, and went on to capture the UFC titles at featherweight and lightweight, becoming the first man to simultaneously hold UFC titles in two weight classes.

Those titles were subsequently stripped by the UFC after he failed to defend his belts.

After his first ‘retirement’ in 2016, he returned in October 2018 to unsuccessfully challenge for the UFC lightweight title against Khabib Nurmagomedov at UFC 229.

Earlier this year, he displayed one of the most spectacular performances of his career to defeat Cerrone – his first win inside the octagon since taking his second world title in 2016.

In May, McGregor declared himself as the second greatest mixed martial arts fighter of all time behind Anderson Silva, adding he would “easily” surpass the Brazilian before retiring. 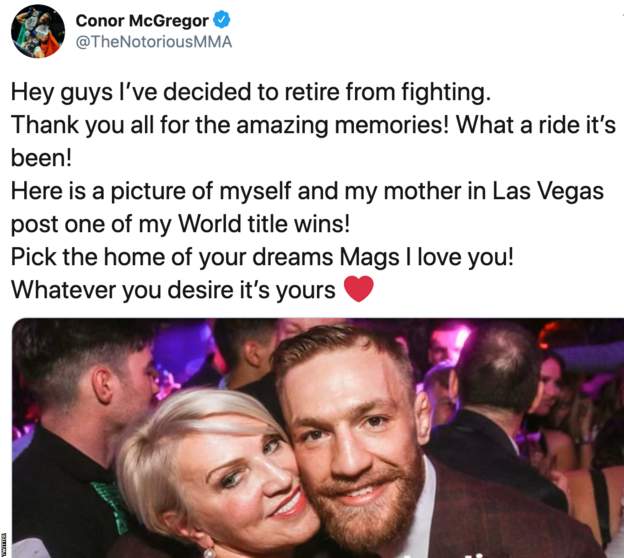 However, McGregor’s time in mixed martial arts has also been marred by controversy.

In 2018, he was ordered to have anger management training and perform five days of community service by a court in return for criminal charges being dropped after he had attacked a bus containing rival UFC fighters.

Video footage appeared to show McGregor throwing a railing at a bus carrying Nurmagomedov and a number of other UFC fighters.

In March 2019, McGregor was arrested in Miami for allegedly smashing a fan’s phone as they tried to take pictures of him. The charges were later dropped, although McGregor settled a civil lawsuit with the victim out of court.